Blocked drains are an occurrence that happens eventually to all households. You might have experienced being in the shower with the water level slowly forming a puddle or even swiftly rising, submerging your feet. While brushing your teeth, you may be shocked to find out that the sink is already half filled with water. The worst conceivable drain blockage that could happen in a home or business though, is if your toilet does not flush properly even with after several attempts. Aside from being unhygienic, this is also gross and might lead to embarrassing situations.

Blocked drains are the end result of an obstruction in the area between your drain and the drainage pipes that it leads to. It is usually caused by trapped solid objects such as hair, dirt and debris. The clog gets worse when household products such as shampoos, conditioners, soaps, and detergents accumulate. This can inevitably become denser and will hinder the water from flowing smoothly through your drain pipe. 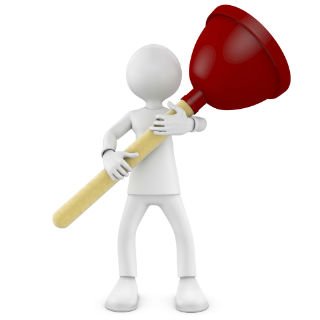 There are several methods to get your water pipes working properly once more. A number of devices found in the market can repair blocked drains given that the cause of obstruction is an ordinary material such as hair. If the blockage is at an individual sink trap, light up the trap with a flashlight. If you can clearly see that the cause of the jam is accumulated hair, you may use a wire bent at the end like a hook, or even long nosed pliers to pull our the clog of hair yourself.

A toilet plunger could also be used for drain cleaning. Just make certain that the rubber cup of the plunger completely covers the sink, tub, or toilet drain. There must also be an ample amount of water around the plunger. Force the plunger up and down until the clog is successfully removed. This may take a few minutes, but be patient because this method really does the job. It might not suffice, however, if the blockage is caused by rust, mineral accumulation or a busted pipe line.

The plumbing snake is one device used to clear drain blocks. It is a pliable wire that is forced down through a drain and may be rotated by hand or by a machine, depending on its size. Care must be made, though, as using a power snake improperly can lead to serious injury. This tool is best left in an expert plumber’s hands if you do not know how to operate it correctly.

One more device which is used for unclogging drains is the kinetic water ram. It can unclog some drains even if the block is distant, as long as the drain pipe is full of water when the ram is put to use. It compresses air in a cylinder, and discharges this air powerfully to break up the obstruction in the pipes. It is imperative not to use too much pressure other than what is needed to unblock the drain. You could end blowing the trap right off the sink if the air pressure is too high.

Using de-clogging chemicals can effectively unclog your blocked drain. But these chemicals are hazardous and may harm our environment as most of the chemicals are toxic and could cause burns or poisoning.

A blocked drain poses a substantial health hazard. Sewerage-borne germs may cause fever, vomiting, diarrhoea, and stomach ache. It is important to be watchful and if any family member exhibits any of these symptoms, consult a doctor right away.

Things that come in direct contact with the dirty water should be decontaminated using household bleach mixed with water. Any items that could not be disinfected such as stuffed toys and the like should be disposed of immediately.

In dealing with a blocked drain, it is often best to leave the dirty work to the professionals. Your trusted plumber can quickly fix the trouble. This might be more expensive than doing it yourself, but you can be assured that your clogged drain is thoroughly cleared and it will not trouble you again in the near future.

Be sure to have your plumber’s number among the list of your emergency numbers. In most cases, a plumber is just as important as a doctor. With his help, your blocked drain could be gone in a jiffy.