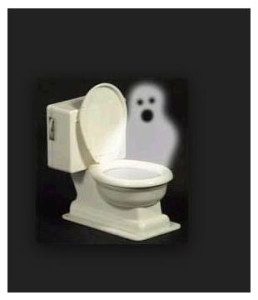 Every so often we get a call from someone who reports their toilet flushing when nobody has used it. What is actually happening is the toilet tank re-filling as the water drains out of the tank and the water level gets low enough to trip the fill valve and the tank refills. This is called “Ghost” or phantom flushing and is usually a leak, the result of a worn rubber flapper that is allowing water to seep from the tank into the bowl and down the sewer. A poorly fitting flapper can waste a huge amount of water, and that can get expensive. An improperly adjusted flapper chain also could cause the problem.

“One big problem we find is left unchecked for long periods , a build up of minerals can occur in the drain pipe ( usually calcium and lime ) which could be hard as a rock and expensive to remove” says Scott Ferrell, owner of Black Mountain Plumbing, Inc in San Diego, CA.

Noisy pipes are relatively common, particularly in older homes in San Diego. After all, the plumbing s a dynamic system, with water rushing throughout the home under a good deal of pressure, and there is a ton of power in all of that. The pipes don’t have to be noisy, though, and while some noise is just annoying, persistent noise from water pipes can be a sign of a problem that can range from the simple – a worn out washer – to the serious – a blocked pipe that could burst.

One of the chief causes of water-pipe noise is air in the pipes, which can cause the pipes to give off a vibrating sound or even short bursts of banging not unlike a machine gun in a gangster movie. The problem is that air gets trapped in the pipes, especially in high points in the system that can be difficult to eliminate. Air trapped in pipes can be fixed by flushing the line or putting in a p trap (A p-trap is comprised of a tailpiece, the curved trap piece, and a drain elbow).

Air trapped in pipes is often mistaken for another of the chief causes of noisy pipes: banging, or what is known as “water hammer.”  This can be a loud bang when a faucet is turned on or off, or a series of bangs lead by a big bang and then “echo bangs.” However, if the bang happens when a faucet or valve is opened, it is most likely air in the pipes. If, on the other hand, if the bang comes when you turn water off or the washing machine or dishwasher changes cycles, then it’s probably water hammer.  To fix this your local San Diego plumbing experts usually recommend the introduction of air chambers or the installation of water hammer arrestors.  For more information on water hammer and phantom flushing call Black Mountain Plumbing today at 858-536-4161.