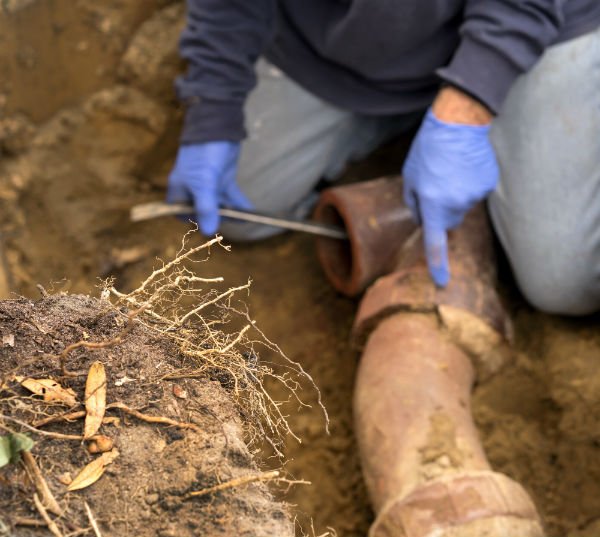 Believe it or not, your plumbing system could be in danger because of your landscaping. Major pipe damage can be caused by tree roots that travel long distances in order to find water, especially in the conditions of persistent drought. When the shrubs and trees get thirsty, they follow trail of moisture vapors coming out of holes, small cracks or joints that are poorly sealed in the water and sewer lines. These openings can be penetrated by roots in order to reach the moisture and nutrients inside the pipes. In case they are not stopped, the roots can completely fill a pipe with many hair-like masses of roots at all the entry points. These root wads can become clogged quickly with the grease and other types of debris flowing from homes to main sewer lines, causing reduced flow and slowed drains. In case the roots aren’t removed, it can result in complete blockage. And with nowhere out, the sewage and waste water might back up into your house.

The root systems are very powerful. You would have probably seen the cement sidewalks buckling from the pressure of roots. Root systems can place considerable strain on cracks or pipe joints, often breaking the pipes and resulting in costly pipe damage repairs or replacement. In case your house is over 25 years old, it is likely that you have the clay (terracotta) pipes or steel pipes (that are susceptible to corrosion). These pipes have porous characteristic requiring additional care as they are old and have likely reached end of their useful life. The most common type of pipes in older sewer and water lines are the clay pipes. Tree roots can easily penetrate and damage these pipes. Root intrusion might also be allowed by the PVC pipe or Concrete pipe, but the extent of intrusion in these pipes is less than that in clay pipes. Usually PVC pipe has more tightly fitted and fewer joints and their chances of leaking in case of settlement around the pipe are less as compared to other types of pipe.

If the incoming water or outgoing sewer lines bubble, gurgle or run slow and you are suspecting a clog, it is unlikely that the problem will go away on its own. You should call a professional in order to investigate the problem. In case the roots have entered the pipes, they can be removed by a professional plumber by using powerful cutting blades. The process might involve digging or the use of new trenchless technology in order to reach affected pipes that are usually located few feet down the ground. Once trench has been dug, plumber will repair the pipes or replace them and cut away the threatening roots.

Chances of root intrusion can be minimized by limiting the number and types of plants near water and sewer lines. The location of new plantation of large trees should be carefully considered and they should be planted where roots cannot reach the pipes.

Think you may already have tree root problem?

Don’t delay and call in a professional plumber if you have pipe damage.  Act before the problem gets worse.